The Corona / Covid 19 pandemic has affected nearly each of the industrial countries and the governments work hard to manage the situation in order to keep the development under control, as far as possible.
The alliurisbriefing newsletter is intended to give a quick overview on the current situation in the countries of the Alliuris member firms. The information is relevant for the moment when it was issued, but we know – and, dear readers, always keep in mind – that the economic and legal framework is much influenced by the current development and its impacts on countrywide health, social life, economy and the consequently its legal framework.
If you are planning certain activities or decisions please search legal advice from lawyers – our member firms are ready to support you. 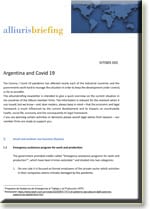 The decree2 from 04.24.20 established credits for those who were part of the government census [from 2018] with a non-agricultural business with at least six months of operation and included in the list of municipalities that the government also states (which number can increase3), among other requirements.4
The program give access to the financial support of $ 25,000.00 Mexican pesos (986.87 Euros approx.) [in one exhibition] for micro-enterprises (self-employed, service providers and solidarity companies from the formal sector added, also domestic and independent workers) and which must be reimburse after a three-month grace period, and starting from the fourth month will be 33 monthly reimbursements of $824 MN.

1.2 Solidarity credit to the word5

Created for formal micro-businesses whose have not reduced their workforce during fiscal year 2020 or paid the salaries from their staff (until 04.15.206), with an equal access to a financial support for $ 25,000.00 Mexican pesos (986.87 Euros approx.) too [also just one exhibition], but being reimburse depending the amount of employers.
In total were 1 million credits being planned: 500,000 in the metropolis, 300,000 in the south-east and the rest 200,000 around the country.7
Until September 30th, there has been given 1,201,141 [credits] from all states of the Union, with an amount of more than 30 thousand million Mexican pesos.8

According to the press release from 07/2020 there is a “Direct productive credit” made to reactivate the economy of the most affected municipalities through the pandemic.

Every state regulated this specific topic, including or not the possibility of paying a sanction in case the tenant comes into default of his payments but there was not a specific federal provision applied to all states. The tendency was to suspend the clause from contracts in case of two months payment (Ap-May or May-Jun).

At the beginning of the pandemic, the government decided to declare at March 30th a “Sanitary Emergency”, consequently resulting into the closing of schools, businesses and more. The legal conflict was that it was declared by the authority a “Sanitary Emergency” (SE) and not a “Sanitary Contingency” (SC) according to what already art. 42 bis in correlation with art. 429 IV of the Federal Labour Law considers (created because of the AH1N1 pandemic in Mexico in 2009), which states that in case of a SC the employer must pay every day that the suspension remains for a month, the amount of what a minimum wage represents. Because the government made it ambiguous, they expected all businesses to pay the full amount. No transcendental reforms have been made in this area this year.

There is not a price restriction before and after the pandemic. However, the government already runs a program called “Guarantee prices for basic food products in charge of the Mexican food safety” 12 which means that specific products like corn, beans, milk, rice and wheat will be limited by their price and won´t follow properly the market rules. Also the imported gasoline has been partially subsidized and there is a threat to control it more. Controversial is the proposal to establish a control to the fees for insurance companies that manage the retirement of employees, which is planned to find an average fee comparing the already existing in the USA, Chile and Colombia.13

There are four categories of business being handled in the 05.29.20 DOF14 directly related with the number of their employees: micro, small, medium and big business.
There are also two categories being relevant according to this public release: essential and non essential activities. 15
Starting from June 1st are all essential activities allowed to begin, not so companies with no essential activities, which parameter to open is a “traffic light” with four colours: red, orange, yellow and green, controlled by the federal state but it is now regionally approached and reinforced when needed it. Relevant is the colour orange, which means the capacity must be no more than 30% of the influx allowed in a closed space. Mexico City also has a limit of 40 or 60 minutes per person to be in a specific store or in the mall.16 Companies have to create a sanitary protocol according to their needs that must be authorized by the authority, but even then, they must follow the “traffic light” sign.17

According to the information of the government 18 the general prohibition is: maximum 50 people in essential activities. However, every state and municipality have their own policies according to the number of infected. The tendency from many states is to sanction parties and private meetings with big penalty fees but allowing social contact and sanctions differ drastically. 5.2 Specific prohibitionsThe government has no restrictions to travelling into the country19, however the borders between USA and Mexico are just opened for essential activities until October 21th.20

According to Transparency International (global organization against corruption) is Mexico in the rank 130 from 198 countries with a score of 29/100 being 0 no corruption.21 Even if it is positive to consider it so, the perception is different. Just in Mexico City in 2019 half of the companies being asked by the National Institute of Statistic and Geography (INEGI) said they knew about acts of corruption by the procedures of the bureaucracy and a third of those companies were asked to participate into it. 22

John Hopkins Institute says that there are 83,642 deaths and 814,328 infected until October 11th 2020. 23 It is strongly criticized that until August these year Mexico had tested 3 out of 100,000 people in comparison with USA that tested 150 of every 100,000 of their population.24 They refuse to make massive tests. As a comparison, Germany performed until these October around 18,1 million Covid-tests25, while Mexico barely 2 millions.26

There is a polarization in the country being reinforced by the President Andrés Manuel López Obrador. As a leftist, his party embraces a hostility towards what we calls “neoliberalism” since the begin of his presidency back in 2018. The management of the pandemic has been severely criticized national and internationally. One of the reasons is his position regarding the obligatory use of face masks, similar to his neighbours from USA and Brazil, arguing that it is not scientifically verified that they help.27 Another is his position against properly helping companies in their finances, where the expectation was a debt acquired from the government between 0.5 and 5% from the GDP, which he refused saying that the owners and stockholders must assume their debts alone.28 The credits being given to the companies were not enough and as a consequence, more than 12.5 million jobs were lost due to the pandemic, where 10.4 million jobs were informal and the rest 2.1 millions were formal. Until now is estimated that 7.8 informal jobs were recovered29 and just until August these year were more than 90,000 formal jobs achieved, it means, barely 10% of them. 30 The President informed that until October there were at least 250,000 formal jobs. 31To recover the rest of these jobs could take minimum 5 years.32 Renewable energies are also not part of his priorities, at least seen by the new rules and measures assumed during the pandemic by the National Center for Energy Control, which limited substantially the production of solar and wind energy already produced by companies in the country, in order to support the so called state productive companies: Federal Electricity Commission (CFE) and Mexican Petroleum (PEMEX)33 and refinance their debt.

Schwab Klaus, from the World Economic Forum wrote:
“Mexico is 48th—and improves its score performance by 0.3 points—yet it drops two places due to other countries improving at a faster rate. Uncertainty and trade tensions stemming from US international trade policy constitute a headwind impeding the further socio-economic development of Mexico, reducing the expectations of business leaders and, consequently, their willingness to invest. In this context, Mexico’s competitiveness performance is mixed. On one hand it has achieved some progress on all its four lowest-ranked pillars: Institutions (+0.6 points, 98th), Labour market (+1.4, 96th), Skills (+0.4, 89th) and ICT adoption (+3.7, 74th). On the other hand, these improvements have been, to some extent, insufficient to fill the gap with other more competitive economies. For instance, in terms of skills, education attainment is still low (8.6 years on average, 84th) and curricula are not up to date (digital skills, 99th, critical thinking, 103rd). Similarly, improvements to institutions have been concentrated in the public sector’s administrative efficiency (+4.5 points, 59th), while security (138th) and transparency (116th) are still problematic. Further, there are a few areas where performance declines. Inflation, for example, has increased (5.5%, 111th), healthy life expectancy has fallen by 0.9 years (60th), and lack of improvements in transport infrastructure (-1.3, 51st) require further efforts to advance Mexico’s competitiveness closer to the frontier and to that of the top-ranked economies.“ 34

10. Perspective for the future

The GPD will fall in 2020 at least 7,5%, or 8.6% in case of a second wave of the virus but will increase 3% in 2021.35 The Office of the Treasure and Public Credit (SHCP) announced in October at least 39 new investment projects, which will increase in the following months.36 The big bet from the government is the United States-Mexico-Canada Agreement (USMCA) or the new Nafta, which entered into force last July 1st 2020. Under the most relevant clauses are referred to the rules of origin for the auto-mobile industry, where not 62.5% but 75% of the main components must be produced into one of these three countries to avoid paying duties. In labour law, between 40 and 45% of auto-mobiles produced in this zone must pay a minimum salary of 16 dollars per hour, among other reforms regarding custom and trade facilitation, an easier certificate of origin, no duties for digital trade and digital products in principle, with the possibility to review the agreement every 6 years with a 16 years sunset clause.